Hit enter to search or ESC to close

Did anyone try looking for a hotel or a holiday on Google recently? It’s a bloody mire, I tell ya.

Of course, the nowt-but-ads-above-the-fold era has been inflicted upon us now for nearly as long as Justin Bieber (and just as unpleasantly, in my admittedly biased opinion as an organic marketer) but the travel sector has been given a particularly good thrashing in this regard. Probably something to do with the fact that the travel and tourism sector generated nearly $1.6 trillion in 2017 and doesn’t show any inclination to slow down. Can’t blame Google for wanting to get its claws into all the advertising implications of those juicy numbers; the damned thing is a business after all and it hasn’t become a near-global monopoly on the search market by not going after anything that smells of money in the same way that Donald Trump goes after an anti-NRA tweet.

Heck, even if you scroll down through all the ads – including those now littering the once innocent and virginial shores of Google Maps – the story gets no less depressing. Pretty much all the big ticket terms are dominated by the same set of repeated aggregator players. It makes the way Amazon and eBay strut about the retail SERPs look positively mundane by comparison.

But wait! I’m a specialist tour operator in a particular niche! Well, you might have a smidge more of a chance at getting some impressions on page one, but it’ll be tropical in Lapland before you manage to do so without being continuously elbowed by the likes of Expedia, TripAdvisor, LastMinute.com and the other variations on the aggregator leviathan scene. 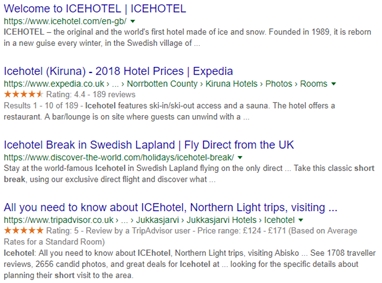 Given this sort of continuous heartbreak I quite often get clients collapsing into my arms weeping (well, only figuratively…thus far) because no matter how much effort they plug into SEO nothing seems to move the damned bar. We’re still nowhere compared to Kayak, come the wails from the holiday providers. Why won’t Booking.com just go fall under a bus? plead the hotel owners.

Well guess what, travel marketers – there is hope for you yet, and in fact plenty of it, but in order to dry your tears you’re also going to have to evolve your thinking, start better understanding the needs of your users, and most importantly stop Googling “hotels in New York” every five minutes on your work laptop and sending me the screenshot with accompanying string of email expletives.

Proof, you say? You want proof? All right, how about this fella right here? I’ve omitted the numbers for client confidentiality but this is no tiddler, that’s at least half a million users right there.

So, is the organic user base of this brand exploding YoY? Well, no, but let’s be realistic here – 7% YoY organic growth is frankly bloody good in today’s travel sector, especially given all the depressing screencaps further above. Note the particular bumps in peak seasons around August and January, too, having the impact where it really counts. Yum.

The answer is simple to write down but immensely complicated to actually bring to fruition: this business got its head out of Google chasing and just got to know its customers better. Yep, no magical SEO tricks or mythical silver bullets – they just became far more user-centric. Did they blog and produce great content? You bet your ass they did – but they segmented their data to the nines to make sure that they were producing the stuff to do with their destinations that their converting users were interested in.

If your converting audience are all golden oldies enjoying their twilight years, that piece talking about extreme motorcycle skydiving through the Grand Canyon is probably not what they’re after, even if you happen to have won all kinds of awards and have the single best darn Grand Canyon holiday offering in the known universe. How about the best locations to see an amazing sunset over the Grand Canyon, with a particular slant to spots that are accessible without six hours of hiking, a short space shuttle ride and a last-minute pole jump?

The oldies can be surprisingly big on selfie sticks, though.

Too obvious? Think you’re doing this already? Well, my clever friend, are you also personalising the content and experience your recurring users have onsite so that they are repeatedly exposed to the things they find most compelling about your offering? Don’t just yoink in any old Grand Canyon article to your Grand Canyons holiday landing page if you’ve got a cookie (permissions granted, of course) that is telling you that this user is a great-grandma. There’s no Google effect here (natch) as the bot doesn’t do cookies, but guess what – it’ll keep Gramma on your site longer, sending positive engagement signals, and it’ll make her much more likely to remember your brand and come back once she’s done browsing and ready to make a booking.

This less generic, more specialised and tailored content approach works offsite too. Collaborating with influencers? Great! Bypass the big ones and find the niche, hungry ones with particular interests and a dedicated group of highly engaged followers. They may be small, but they’re far more passionate and if their message aligns with your brand they’ll be infinitely more powerful for helping grow your audience. Doing digital PR? Fab! Ditch the nationals-or-bust approach and get creative with messaging and release angles.

Everyone talks about the top ten up and coming destinations of two thousand whatever-it-is or the secret gems of whatever part of the world is hip at the moment. Who’s talking to the specialist animal photography or wildlife press about the Kenyan safari tours with the highest number of hats eaten by passing antelope? What about telling the family cruise enthusiasts which liners have the most impressive density of water wings per square foot of onboard swimming pool on an average trip?

Or, y’know, some statistics on the best cruise moves.

Travel brands can’t afford to just focus on Google any more. The ecosystem is horribly biased towards behemoth aggregators, especially for the big ticket terms, but that doesn’t mean smaller brands and individual operators in the space can’t get an arm in. The trick is to get your head out of the Google-centric space and into the customer centric one. Where are the eyeballs you want to reach? Yes, they’re on Google searching for things like “hotels in New York,” but they’re also on social media (so use the right hashtags and post the right stuff) and on editorial sites (which ones, and how can you get placement there?) and following influencers (that are highly relevant to their particular interests) and searching for things in a broader research mindset like “why is the Grand Canyon that colour” and “why is the sea in Hawaii so clear.”

Perversely, of course, gaining this understanding of your customers to boost your engagement and CVR and LTV and other lovely acronyms is actually a sure-fire way to grow your organic acquisition as well, but not because of anything as straightforward as links or content or site speed or anything else associated with “SEO” as such. Stronger brand = stronger traffic. It really is that simple.

In theory, at least. The execution…well, that’s a whole other teapot of sardines. But adopting the right user-centric mindset in your business is the first step and, in far too many cases, often the hardest. So get out of the Google bubble, stop squeaking endlessly about the SERP and nothing but the SERP, and get to know your users as intimately as you know that bloody landing page on Experian that keeps beating you to the top ten listings. It’s more useful, it’s far healthier, and frankly it’ll do your business a hell of a lot more good in the long run, too.

Puglet Digital Ltd. is a company registered in England, no. 11526110. Logo and illustrations by Vidya Andarikha.

We use cookies to ensure that we give you the best experience on our website. If you continue to use this site we will assume that you are happy with it.Ok